This past August, in the heat of the sticky, humid summer, a group of seven women headed to Rifles Only to join Lisa Bynum for private instruction from Jacob Bynum and Lindy Sisk. I’d talked with Jacob and Lisa about a training course geared towards women, but more specifically for ladies who were competitive shooters in the precision rifle community. These conversations went back and forth over the course of a couple of years. Now I’m like the official queen of “squirrel” moments so the idea was placed on the back burner for a while for me while I prepped for matches last year. To be honest, I don’t think any of us were really sure how many women would be interested in a course for just the ladies. I guess it’s true though: if you build it, they will come.

We’d all envisioned a course where female shooters wouldn’t feel intimidated and would feel confident asking questions or working out problems for themselves. In case you didn’t know, women are incredibly teachable. Ladies may have played video games and cops & robbers as kids, but we recognize when we don’t have all the answers and actively seek out someone who can help. Plus, we want to succeed just as much as the guys!

I started asking around in February of this year to gauge interest. The responses were overwhelming! The dates for the class were picked based off when Rifles Only would have a lull in their training schedule. We even came up with our own hashtag! #LORO. It was our own little shorthand for Ladies Only at Rifles Only. I’ll totally take the blame for forgetting that south Texas in August is miserable. Then again, I’m from Arizona, so heat is not exactly foreign to me! Some of the ladies asked were sponsored precision rifle shooters, some were from 3 Gun, and others were pistol shooters.

At any rate, seven of us showed up to Rifles Only on a Thursday afternoon. I actually brought along two rifles for two different reasons. One was my .308 factory Remington 700 to use for all of the training drills. I also brought my brand new 6XC with a Defiance Deviant that had just come back to me from Spartan Precision Rifles. Hey, I had a match the following weekend and needed to get some rounds through the new Hawk Hill barrel. Both are in Manners T4A stocks and have Timney LH flat triggers in them. They also both have Vortex Razor Gen II’s with the EBR-2C reticle, so it was easy for me to transition between the two.

The eight of us met with Jacob that night and went through our expectations over dinner. The ladies who made it to south Texas were: Jessie Dussart, Melissa Gilliland, Steph Bostwick, Marie Roberts, Ursula Williams, Jaci Janes, myself, and of course, Lisa Bynum but she runs the place! All of our “please teach me” lists were close to identical: wind reading, barricades, rooftops, positional, and how the heck do you shoot a mover (except Lisa – she’s a rockstar on a mover)!? I had an inkling that these topics would all be covered because they’re pretty common topics among precision rifle shooters as areas where they’d like to improve. 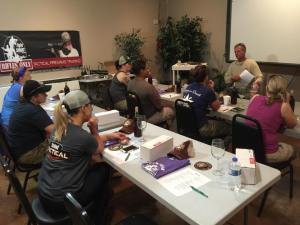 Anyway, our summer camp was just getting started! The bunk house was reserved for us, and let me tell ya, we took over. There were some items discovered in the bunk house that made many of us laugh. I won’t go into detail there, but let’s just say the men who stayed in the house in the past were very well protected. I’m almost positive the bunk house has never smelled so good or had as much purple draped everywhere. I imagine guys probably have an entirely different diet than we did… Marie brought enough delicious food to keep all of us fed for the entire weekend including a very much talked about wheel of brie that was devoured the first night.
On Friday morning, we met in the classroom with Jacob and Lindy who would be our instructors for the course. Jacob reminded us all of inherent dangers with firearms: their intended purpose is to kill and that is something none of should ever forget.

After the initial classroom portion, we headed out to the Carbine Pit so our instructors could diagnose our form. The first errors shooters tend to make come from improper body positioning and sight alignment. We were each asked to find an aiming point on our numbered target and shoot 5 rounds. Back to classroom with us after the targets were pulled. Jacob then reviewed each lady’s shot group with the group. From the shot placement, he was able to see areas where we could improve. You have no idea how much effect breathing has on your group size until you realize what you’re doing! Not being properly aligned behind the rifle means you won’t have consistent shot placement. What your trigger finger is doing (or not doing) can also have an effect on your shot placement. All of these mistakes are magnified when you start shooting further distances, so it was important to find out what could be tweaked before we went any further in the instruction.

The rest of the morning was spent on the short range. We all had the opportunity to check our zeros. Once that part was out of the way, we each took our time getting a good group at 100 yards. Then we moved to the barricades. There is almost a science to shooting off a barricade. Obviously the more stable you are, the better your shots will be down range. But how do you get stable? Personally, I prefer to use a sling (a Rifles Only Gear carbine sling) for added stability but I’ve seen plenty of people clean barricade stages with no additional gear at all. Jacob has worked with me before on slung positions, and I routinely practice with them to get better. I learned that I still wasn’t quite doing everything correctly. A few more tweaks correcting my body alignment to the target and I was hitting my shoot-n-c every time. Marie blew us all away though! She had a tiny little group about an inch big where all of her shots landed.

We stopped each day just a little early due to the heat. The humidity was up around 100% and with the temperatures hovering between 105-107 degrees, it made the heat index somewhere in the range of 117+/-. In other words, we were melting. I have no idea how much water we each drank over the course of the weekend, but it was a lot. When we weren’t behind our rifles, each of us was drinking water. We broke for lunch each day, more to have the chance to cool off than anything else I think.

Stayed tuned for part 2 next week!

One thought on “#LORO: Ladies Only at Rifles Only”