As we all have to start somewhere, I’ve decided to kick this blog off with talk of a match. Shocking, I know. Eventually I’ll get into some of the back-story of how I ended up becoming interested in tactical precision rifle shooting. I might even discuss a bit about what I do to practice/train before matches. I’ll definitely talk about food though because I have a short attention span and like to eat.

Yesterday our club, AZ Long Range Precision Rifle Shooters (AZ LRPRS),  tried something a little different. We invited our club members to meet us at the range for a precision rifle match with a twist. We had stages that were very similar to what we normally do with centerfire rifles, so what was the twist? We asked everyone to bring their .22’s. There were targets set from 25 yards to 300 yards.

I’d be the first to admit that the allure of shooting a .22LR was lost on me a while back. I had a used, not-nearly-as-accurate-as-it-should-be rifle so I struggled with making impacts. If I’m struggling, then I’m just not having as much fun as I should. All of that changed when my husband bought me a left-handed CZ452 American. Oh, how I love this rifle! I replaced the stock with a Manners Composite T4CZ so it would mirror my other rifles. I have a couple of modifications I’ll make in the future to the stock. My competition stocks are T4A’s and have all had the palm swell built out about an inch for a more comfortable trigger pull. I still need to do that to my .22 stock as well as add some flush cups so I can practice using my sling. 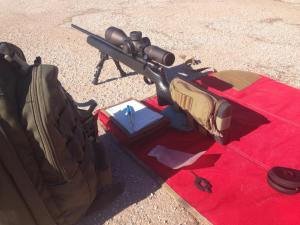 I mounted a Vortex Optics Razor Gen II 4.5-27x scope on top and headed to the range to get it sighted in at 25 yards. I was able to focus on targets down to ¼” in size with zero issues. In fact, I had the rifle zeroed in 3 shots! There were a few jokes about my going overboard with a high power optic on a .22LR… right up until a gentleman showed up with a fixed 36x scope! To be completely honest, I left the magnification at 15x for a majority of the stages. The EBR-2C reticle made it ridiculously easy to utilize holdovers on a stage that required impacts at 100 yards, 200 yards, and 300 yards. My DOPE (data on previous engagement) was .8 mils (milliradian), 6.0 mils, and 11.7 mils. When I tried to dial I felt like one of those folks who still uses an MOA scope in this game! I ended up deciding to dial for the middle target and hold under the target at 100 yards and hold over the target at 300 yards.

Each stage gave the shooter 3 opportunities to shoot for score. Most folks don’t shoot their .22LR’s out to 300 yards, so the first run seemed to be where everyone was gathering their come-up’s. The best of the 3 runs was kept for the shooters overall total. So with 8 stages, the high score would be 80 points.

This match was obviously much more low-key than our normal centerfire precision rifle matches. We’re hoping to have more of these style matches so our regular club members will have the chance to bring their kids and spouses out to play. With half of the stages being prone, and half more along the lines of what we usually do (barricades, rooftops, shooting off rails), it was a great primer for new folks without the associated cost of a centerfire match. 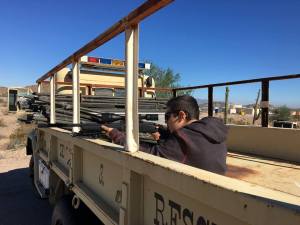 I had so much fun shooting that match yesterday! After the match was over, a few of us decided to challenge each other on the 300 yard target. One of the guys went 5 for 5 standing offhand! I was happy to hit that target 10 out of 10 prone prior to his display of positional prowess. So, not to be completely outdone, I went 5 for 5 kneeling at the same target.

I finished the match in 4th place with 74 points in case you were curious. Perhaps I’ll head to the range today to enjoy the beautiful weather… Sounds like a lot more fun that loading ammo!